Macadam Gardens, a start up in Toulouse

Macadam-gardens, who are you, where are you?

Macadam Gardens is a young innovative start up in urban agriculture. Our first activity was the launching of our on-line shopping site, for urban inhabitants to find innovative and design products, so they can have their own kitchen garden, in house, on a balcony or a terrace.

Our goal is to aware people to agricultural and environmental issues inside our cities, to make them discover initiatives and products in this domain. We try to encourage initiatives thanks to article and interviews on our blog.

After Kate then Pascal, today I want you to meet Lebill, a young man, living BiodiverCity between Brussels and Paris.

Lebill, who are you? Where are you?

Guillaume - 26 years old, coming from belgian countryside. Close to nature since my early years, I chose at first to learn more about our planet. I leaved my countryside to Brussels. My studies (geology and then science and environment management) gave me the occasion to discover several topics, including the one I appreciate the most, agriculture and in particular urban agriculture. If I did not find a job in Brussels, chance was on my side in Paris where I have a part-time job. I still attached to the “big village”, as ride sharers call Brussels, and I live between those two cities, which keep away from “inquisitive looks” kitchen garden and others urban agriculture projects.

I talked about that few weeks ago. The United Nations Decade on Biodiversity is a program to support the implementation of the Strategic Plan for Biodiversity... The slogan? "Live in harmony with nature"!

But I wanted to learn more. So I asked few questions to David Ainsworth, Information Officer at the Convention for Biological Diversity (working in Montréal).

BiodiverCity in Brussels, by Kate

This week, I feel like a trip in Belgium... I met great people...

Kate, who are you? Where are you?

I'm 46 years old, live in Brussels, alone with a 17 years old girl, I had to stop working and, I undergo crisis like any single-parent family. So I asked myself how to live well, reducing my consumption. I love environment, animals et I feel very concerned in human poverty in the world, including poverty in our rich countries...

After Kate, from Brussels, come with me to meet Pascal, from "Réseau Nature" (Nature Network)…

I live in Manhay, a beautiful city in the belgian Ardennes, jI'm working since 2005 in asbl Natagora, whose goal is to hold down loss of biodiversity (nature reserves, species protection) and to make people aware of biodiversity issues. Since my commitment, I'm involved in several projects about slag heaps and climate. Since 2009, I coordinate "Réseau Nature".

Sauvages de ma rue, who are you, where are you?

Sauvages de ma rue is a national participative science program, and also international (we have data from Belgium and Germany). It's goal is to give the occasion to anyone to study and follow urban flora in his neighbourhood.

The Distributed Urban Farming Initiative is a program that unites agriculture with community development, nutrition, and local economic development. The end goal of the project is not simply to build gardens around town, but rather use local agriculture to encourage healthy food choices, promote good health and spur economic growth through entrepreneurship and tourism. 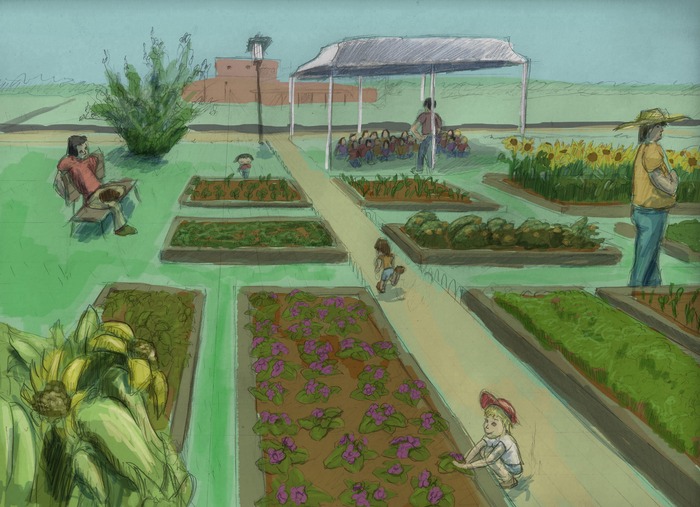 Amandine, who are you, where are you ?

I’m just Amandine, a young mother who decided to sow hope and to have a kitchen garden rather than being afraid for the future of my little seeds. We live in Switzerland in a village « uncountrysided », in the middle of mushrooms-houses (that grow almost in one night), and after few times of doubt about the reasons to stay there, I think we have our place there, to stimulate the desire of our neighbours to let their lawn grow, to compost, to walk to pick up children at school.

ToitsVerts, who are you, where are you?

« Toitsverts » is a french graft, born on a british roof: Livingroofs.org.

A cutting found roots in the south of France and now try to become deeply rooted on other roofs, in the French-speaking world.

For this last day of the year, I want you to discover a musical project about urban gardening... Yes, really!

Welcome to the Seedbomb.net Blog.